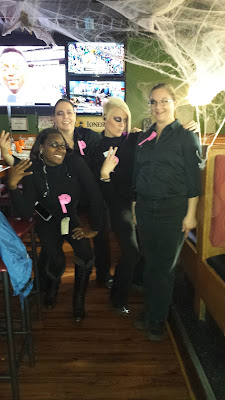 From the moment I met Nicole, I knew it was going to a unique experience and a lot of fun.  See Nicole’s favorite holiday and time of year is Halloween.  One of Nicole’s first questions were: “will your staff get into character and dress up in costumes too?”  Which was ironic because that was going to be my first question also.  I wanted to know how much “Halloween” was going to be a at her wedding because the last October 31st wedding I did several years ago didn’t allow children, costumes and colors were pale blue and gold (which were pretty but not Halloween).   We quickly began planning for fun centerpieces and ways to incorporate the Halloween theme without going cheesy.
*Our staff as the "Blacked Eyed Peas"


All year long we planned for a night reception at a wedding venue with full wedding flare…but the wedding part started to take over the plans and Nicole really wanted her day to be about the two of them and celebrating their love for one another.  We put the brakes on all wedding planning for a few months, took some time to regroup and focus on the items that were important to them…and that’s really when everything fell into place.  I received an email saying…Jenn, have you ever done a wedding at a bar and would you?  We are considering changing venues, times and the overall feel of our event are you in? 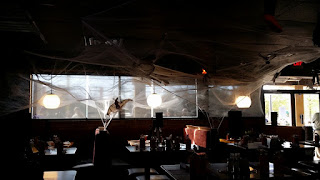 Without any hesitation…my response was ABSOLUTELY!  I named my company Knot Your Average Events for a reason…and this is one of them.  While I LOVE tradition; I REALLY LOVE out of the box. 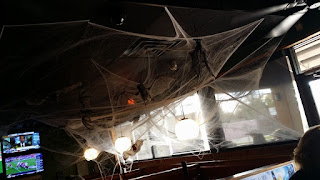 So a few months out from their date, we pretty much had to cancel all of the fabulous vendors (unfortunately due to the new venue) to give them the vision of a true celebration. We choose Jake’s Billiards because it was one of the coupe’s favorite places to hang out with friends, grab lunch and it felt like home because of the staff.  Jake’s Billiards had hosted one wedding reception once before but never the full ceremony and reception, but they were up for the challenge. 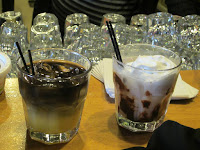 Since Jake’s is a full restaurant (AMAZING FOOD), they handled all of our food, beverage and bar needs including the couple’s 2 signature drinks.  Which they ordered black vodka just for Nicole’s Black Magic signature drink. We created a limited menu for guest to order during the cocktail hour. 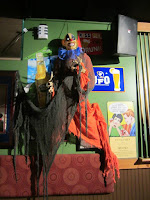 Their staff was amazing to work with and super helpful when it came to set-up and catering.   The best part and huge money saver was décor.  Since Jake’s had planned for a Halloween Bash later that evening, they had already decorated the entire restaurant in spider webs, goblins, and other Halloween spirits. Nicole created the centerpieces on her own and our staff placed them out while she got dressed. 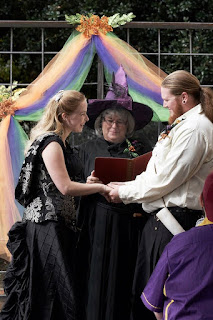 The ceremony took place out on their front patio and we roped off half of the restaurant for a private function during the lunch hours.  Since Jake’s has a state of the art Juke Box, we were able to program all of their preferred Halloween music and set special dances when needed.  Once again their staff wore several hats throughout the event but went with the flow and created an experience the guests are still talking about.


Seeing Nicole’s face light up because her day truly became about them and her vision had played out smoothly made my day!  I know she was stressed going into her event because of all of the last minute changes but I kept reminding her that it all would happen the way it was supposed to and that she just had to trust us in getting it all taken care of… Honestly it did.  Maybe even better than we had even planned. 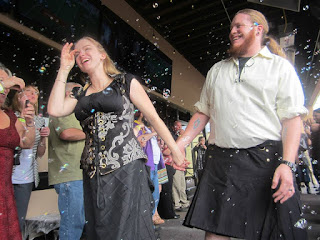 Guests arrived in full costume, they even had a “witch” perform the ceremony and guests kicked off the Halloween day surrounded by love, friends and family. They still had a first touch, cocktail hour with photos, introductions into first dances, an awesome lunch followed by anniversary dance, toast and cake cutting…Plus no HALLOWEEN WEDDING would be complete without me and a few of the ushers breaking out “THRILLER.”  (Only wish we would have gotten that on video…it was awesome!)  I couldn’t have asked for a brunch wedding to go smoother.  Seeing Steve look at Nicole knowing they had created their magical day will be one of those moments I’ll never forget.  We are blessed to get to work with amazing couples like Steve & Nicole.  We wish them a lifetime of happiness and one D*** GOOD MARRIAGE (sorry for the language but it’s inside joke between Nicole and I; we truly become family on this day).  We look forward to the next out of the box event...
Posted by Knot Your Average Blog at 4:12 PM